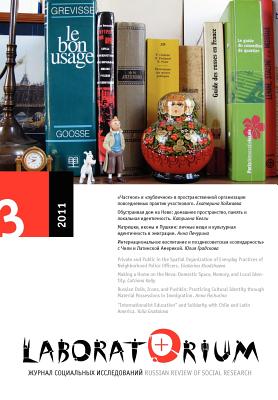 **Articles: * "Private and Public in the Spatial Organization of Everyday Practices of Neighborhood Police Officers," Ekaterina Khodzhaeva (in Russian). This article is an ethnographic study of spatial aspects of the everyday life of neighborhood police officers, conducted in Kazan' in 2007. It analyzes forms of neighborhood policemen's professional activities and four types of spaces where their work takes place: the precinct-the space for basic practices of self-presentation to the controlled population; the space of the precinct station where officers' professional solidarity is formed; the space of the district police department, which usually appears to the police officer as "the bosses' territory"; the citywide space beyond the precinct, where professional duties are often perceived negatively. * "Making a Home on the Neva: Domestic Space, Memory, and Local Identity in Leningrad and St. Petersburg, 1957-present," Catriona Kelly (in English). This article discusses the process of home-making in Leningrad during the post-Stalin era, a period characterized both by the growing importance of the individual one-family apartment, as opposed to the kommunalka, and by a rise of interest in local history. Discussion focuses on the extent to which this new interest in the past, and memory practices more generally (whether locality and family-specific), affected the organization and decoration of the domestic environment. * "Russian Dolls, Icons, and Pushkin: Practicing Cultural Identity through Material Possessions in Immigration," Anna Pechurina (in English). This article examines the meanings of home possessions and their connection to migrants' identity, based on research investigating the homes of Russian migrants in the UK. Focusing on several types of objects (icons, folk souvenirs, and books) that are often found in migrants' homes, the paper looks at variations in the meanings of such home artifacts, as well as various strategies of self-identification used by migrants to negotiate their cultural identity. The data uncovers two main variations in the way Russian identity is expressed. I discuss several case studies that show how these variations among the "refusers" and the "acceptors" are linked to the meaning of home possessions. * "'Internationalist Education' and Solidarity with Chile and Latin America in the Late Soviet Period-Between Geopolitics, Protest, and Self-realization?" Yulia Gradskova (in Russian). The article explores mass Soviet campaigns through the example of Chilean solidarity movements (1973-1989). The main aim of this article is to examine the specifics of the Soviet solidarity campaign and explore its contradictions. The article looks at knowledge about Latin America and Chile among young people as well as at representations of the events in Chile in Soviet publications. Special attention is paid to so-called "informal solidarity"-attempts among small numbers of young people to find their own interpretations of the events in Latin America and Chile during perestroika. **Discussion: "Gender Relations at the Intersection of Race, Class, and Age: Gender Studies and Debates in France in the First Decade of the Twenty-first Century," Juliette Rennes (in Russian). The author presents a range of fundamental differences in relevant feminist debates on the subject of combating discrimination on the basis of race and gender among activists, political institutions, and mass media outlets, exploring the question of whether these forms of social and political struggles are connected or exist in opposition to each other. In conclusion, the author argues that attention to age as a significant sociological variable will enrich our understanding of the structures of gender and race-related forms of discrimination in France today.